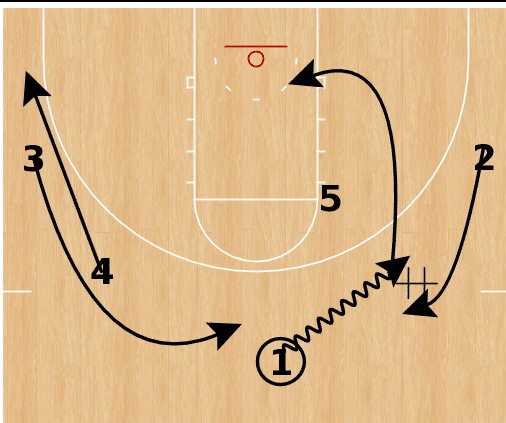 Last night concluded a highly anticipated Lakers preseason. The team made substantial changes over the summer, adding an almost entirely new coaching staff and turning over the majority of their role players as well. One of the major storylines of last year’s failure, alongside injuries to star players, was the absence of creative offense to mitigate the Lakers’ poor shooting. With the new staff coming in and only a marginal improvement in the shooting talent on the roster, there has been plenty of interest in whether the new offensive scheme will more efficiently punish defenses who help off of the perimeter or go under ball screens.

We know that teams will defend the Lakers that way, until two or three more people on this roster establish themselves as respectable three-point shooters or the Lakers acquire some elsewhere. All of the Big 3 have made their careers dominating at the rim, and defenses will pack the paint against them until someone forces them not to. In the video below, from a game against Minnesota late last season, Russ remains more or less stationary in a shooting position at the 3 point line, and his defender feels free to provide an extra body near the paint to prevent dribble penetration. In the end, Monk opts against attempting a lob to Dwight Howard over Karl-Anthony Towns and Austin Reaves takes a contested jumper. Such sights were common last year.

The Lakers have run a more freewheeling motion offense this season, meaning that almost everyone on the floor is giving and receiving screens and dribble handoffs at some point. That puts Westbrook in particular in more frequent situations where his speed can create an advantage without giving the defense time to prepare for it.

While their standard 4-out motion setup involves the post player starting on the strong side, they also utilize setups where he is sent to the weak side dunker spot, leaving only two on the strong side. When those two initiate a screen and roll, any help from the weak side opens a cutting lane because of the distance that must be travelled. In this case, the Kings double AD on the short roll without bringing weak side help, leaving Nunn open in the corner for 3. As one of the Lakers’ few genuine three-level threats, Nunn is especially effective in these scenarios.

Even in the more structured set plays Westbrook is involved in more double screens and dribble handoffs than spread pick and rolls, which makes it more difficult for his defender to go under the screen and cut off his drive. In the play below, Westbrook’s defender is slowed by Anthony Davis’ first screen. Gabriel slips the second screen into the paint, while his defender steps over to block Russ’ path to the rim. Davis’ defender is frozen between AD at the 3 point line and Gabriel at the rim. The play ends with an easy dunk for Gabriel. That is the blueprint for getting the best out of Russ: occupying potential help defenders while getting him into spots where the defense has to respect his scoring. That opens up passing lanes in the paint, which he has made a long and successful career exploiting.

While there have been encouraging signs that the scheme is better-adapted to the available skills on the roster than it was last season, the flaws in the construction of the roster have shown themselves as well. As a team, the Lakers shot 69/231 (29.9%) as a team from 3 during this preseason. For context, last year’s team shot 34.7%. James and Davis are both hitting at a 40% clip and Nunn has made 39.1%, but no one else on the squad (excluding the recent and still marginal addition Matt Ryan) has exceeded 33.3%, which is well below league average. No scheme can fix a shooting problem that acute.

Both Lonnie Walker IV and Kendrick Nunn have shown signs of becoming regular creators, and Austin Reaves has impressed with his pick-and-roll game and passing touch, but their decision-making has at times contributed to Lakers’ tendency to turn the ball over. The Lakers have averaged 19.7 turnovers per game in the preseason, good for 25th in the league. Nunn, Reaves, and Westbrook turned it over nearly 3 times per game each. The team simply doesn’t shoot well enough to turn the ball over at a high rate and keep their heads above water.

In short, the path for the Lakers to be a dangerous offensive team is clear but narrow. They need the star players to remain healthy for most or all of the season. They need the secondary creators to produce without turning the ball over. And they need someone who can stay on the floor defensively and also shoot the basketball aside from James, Davis, and Nunn. If Walker, Reaves, or Juan Toscano-Anderson step up their shooting percentages during the regular reason, it may be sufficient for the Lakers to play with the best teams in the league.

The margin for error, however, is small. Given the history of the players on the roster and the evidence of the preseason, hoping for a teamwide improvement from 3 seems optimistic to the point of foolishness. The buyout market or *elephant in the room* a major trade is a way to address that. In the absence of a move, the Lakers’ have to stay healthy at the top of the roster and the wing position, while also significantly reducing turnovers, if they expect to produce points at a rate that will translate into consistent wins.

Opinion: The Russ Dilemma
Post-Game Recap: Lakers Fall To Clippers In Season Home Opener
We use cookies on our website to give you the most relevant experience by remembering your preferences and repeat visits. By clicking “Accept”, you consent to the use of ALL the cookies.
Do not sell my personal information.
Cookie SettingsAccept
Manage consent