It would be a gross understatement to say that 2022 has, thus far, been a disappointing year for fans of the Los Angeles Lakers. 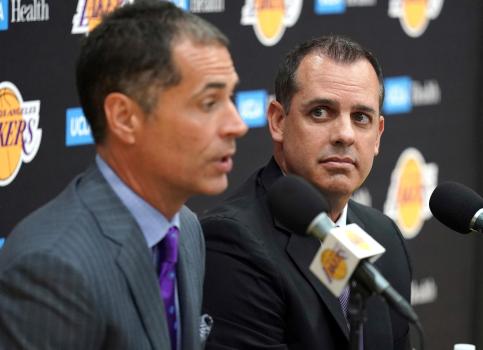 It would be a gross understatement to say that 2022 has, thus far, been a disappointing year for fans of the Los Angeles Lakers. It has been a month and a half of frustrating losses marked by embarrassingly low effort levels from the players, a level of tactical ineptitude from the coaching staff that defies explanation, a front office that evades responsibility for constructing a flawed roster, and ownership that seems content to outsource management of the franchise to friends.

Yet the individual mistakes made at each level of the organization are not, in themselves, critical wounds for the team. There have been stretches where the Lakers have played very well. The bedrock issue is disagreement among the different levels in the organization about what is best for the team, and the apparent irritation each level feels toward the others about that disconnect.

Latent tensions between the coaching staff and front office, as well as between the coaching staff and Russell Westbrook, burst into the open a month ago in a series of dueling leaks and passive-aggressive quotes in the press. Separate leaks suggested that neither the front office nor the coaching staff was enthusiastic about the Russell Westbrook trade, implicitly suggesting that the star players who pushed for it were responsible for the uninspiring results on the court. The players themselves did not immediately comment on it. When asked, they uniformly responded that they were focused on making the product on the court work with the team as constructed.

The trade deadline came and went, and in spite of a great deal of speculation (as there always is surrounding the Lakers at this time of year) the front office did not elect to make any deals at the trade deadline. When the fanbase responded with a mixture of outrage and disbelief, given the poor result on the court, a front office source leaked that LeBron James and Anthony Davis had been consulted, and signed off on the decision not to make a move. Then, Dave McMenamin of ESPN reported that sources close to the players had indicated that such a communication did not actually occur.

There is, from one perspective, a justification for the Lakers being inactive at the deadline. If the front office believes that there is no feasible set of moves that makes this team a potential contender, then the correct decision would be to wait until the Lakers have another first-round pick that becomes tradeable this summer. That pick might be able to acquire a player that could actually move the needle. If the team decides to move on from Westbrook, it might be used to sweeten the deal for a trade partner looking to shed long-term salary in exchange for an expiring contract.

That argument, while it is not invulnerable, at least represents a reasonable justification for riding out the season with the roster as it is. What it does not explain is the unseemly eagerness of all the team’s major stakeholders to evade responsibility for its poor performance. None of them, after all, are blameless.

When there is a pervasive lack of accountability in an organization, responsibility for that lies with leadership. The ownership of an NBA franchise is supposed to hire competent management, hold that management accountable for implementing agreed-upon goals, and make sure the checks clear. The Lakers’ ownership has been largely silent while players, management, and coaching staff all take thinly-veiled shots at one another. The influence of Jeanie Buss seems to be felt primarily through the often heavy-handed intervention of Kurt Rambis, with the effect of undermining both the coaching staff and the front office.

NBA owners don’t have to have an elite tactical understanding of the game or bottomless pockets, but if they are going to be successful in the long term they need to oversee a culture of trust between the various levels of the organization and show an ability to hold each level accountable for its performance relative to goals and expectations. During her tenure as the lone figure at the head of the Lakers organization, it has not yet been made clear that Jeanie Buss is willing to do those things.

If the roster is not fully utilized, that fault lies with coaching. If the roster is poorly constructed, that fault lies with management. If, as in the case of the Lakers this season, both have happened and both parties blame each other, then it is the responsibility of ownership to decide what needs to change. If ownership is comfortable with things as they are, the problems will continue to fester.

The Lakers played with renewed vigor in a close loss on the road to a Warriors team that is capable of beating anyone even without Draymond Green. The security of the trade deadline passing was clearly a weight off of a number of players’ shoulders. But at the same time, the sudden improvement in scheme and a game-plan designed to better utilize Westbrook invites a question: Why the hell did it take so long for the staff to decide to do it?

As the All-Star break approaches, the Lakers continue to provide more questions than answers. The wait-and-see season continues. The first and most necessary indication of a sustainable improvement must come in the form of a clear direction for the team, provided by the coaching staff or front office or ownership or any combination of them, to show the players that someone has a clear vision for how to utilize their talents and succeed.  If the organization as a whole lacks that vision, the ultimate responsibility lies with ownership.

Chaos
Can the Lakers Get Hot With 24 Games Left In the Season?
We use cookies on our website to give you the most relevant experience by remembering your preferences and repeat visits. By clicking “Accept”, you consent to the use of ALL the cookies.
Do not sell my personal information.
Cookie SettingsAccept
Manage consent